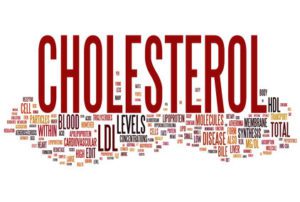 In response to a question about our cholesterol levels since we eat a high fat, Zero Carb diet.

Just a couple of points I might add to these thoughts: Excepting other rare/genetic conditions, it is having elevated levels of glucose in the blood which actually causes atherosclerosis, not the cholesterol itself being shuttled on lipoproteins through the blood vessels.

Glucose molecules are, naturally, ‘sticky’. The problem arises from high-carb diets which create a situation where the body has frequently elevated blood-glucose in the blood, which it has to then clear the excess out of the blood stream. When we are young and fit and healthy it can do so quite easily, but, the more carbs and the longer we go eating high-carbs diets, the harder it is for the body to efficiently perform this task. And the longer this glucose is circulating before all the excess amount can be cleared, the more it can cause problems.

This is because it can react with certain molecules in a process known as glycation, effectively ‘attaching’ itself to certain molecules, including the transporter proteins which carry the cholesterol that the body needs to deliver to the cells which need it.

So it is this, for the greater part, which eventually over time causes the plaques to form in the artery walls which can thus lead to the narrowing of the vessels and, via other various cascade effects, also contribute to people’s vulnerability to CVD (cardiovascular disease), etc.

The process is far more involved and complicated than that, but this is the underlying basic environment which generally causes the problem, not the cholesterol itself, which is so vital to health that the liver will find ways of producing it even for those who stop eating food-sourced cholesterol. Cholesterol itself incorrectly gets maligned when actually, it is the sugar which causes the problem.

Secondly, gluconeogenesis is a perfectly normal process and in itself is just another vital metabolic function which the liver performs. Certain amino acids *can* be shuttled into the glucose cycle. But just because they can, doesn’t mean they *must*. There is a big difference. This entire metabolic milieu is very complex but the basic gist of it is that once again, gluconeogenesis is a ‘problem’ only for a body already seriously compromised and suffering from insulin dysregulation issues.

It’s also helpful to keep in mind that, all these metabolic pathways are interconnected and don’t work in isolation. For example, one (of the many) roles insulin plays is to turn off gluconeogenesis in the liver. At face value, if you buy into the simplistic representation of the ‘gluconeogenesis is bad’ notion which people have been led to believe from all the keto-type fear-mongering out there, then you would think, oh, that’s great, switch off gluconeogenesis, that must be a good thing, right?

But actually, no, it’s not a good thing at all. In fact this is one of the problems with continually high insulin levels from all the carbs people continually eat. Because this then causes other hormonal cascades which, down the line, add to the blood-sugar issues which then over the longer term can cause Insulin Resistance and create an internal environment in the body where Metabolic Syndrome Disorders of every variety can develop.

For more on gluconeogenesis, see this post: If You Eat Excess Protein, Does It Turn Into Excess Glucose?

To learn more about the Zero Carb Diet, please join us in our Zero Carb Health Facebook group.