Zero Carb Health
All about the Zero Carb Carnivore Diet.
Zero Carb Health is a participant in the Amazon Services LLC Associates Program, an affiliate advertising program designed to provide a means for sites to earn, at no cost to you, advertising fees by advertising and linking to Amazon.com.
CarbohydratesDiabetesWeightZIOH Old Blog 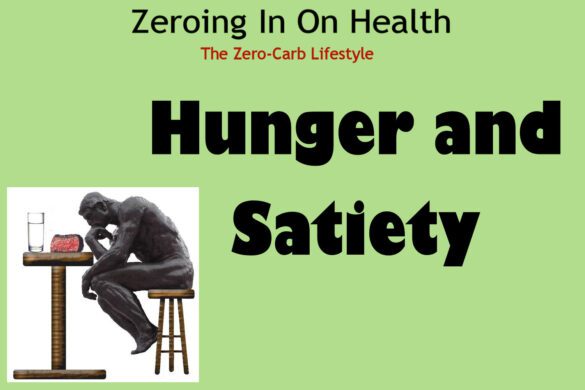 By Charles Washington – Founder of Zeroing in on Health (ZIOH)

Many people observe that when they eat foods high in protein and fat, they have a hard time binging. However, with carbohydrates, we don’t seem to have that protection. Many of us can imagine eating an entire container of movie popcorn with the butter, or finishing off a dozen donuts or even an entire pizza. Researchers have studied the metabolic background of hunger and they made two important universal observations:

First, it’s possible to still be hungry on 10,000 calories of carbohydrates; and,

University of Vermont researcher Ethan Sims conducted overfeeding experiments on convicts. He found that a person can eat as much as 10,000 calories per day of mostly carbohydrates and still feel hunger late in the day. Subjects fed 800 superfluous calories of fat developed marked anorexia. Sims and his colleagues neglected to publish the fact that it seemed impossible to fatten their subjects on high-fat, high-protein diets. Edward Horton, who was a colleague of Sims at the time, related that volunteers would sit staring at “plates of pork chops a mile high and they would refuse to eat enough of this meat to constitute the excess thousand calories a day that the Vermont investigators were asking of them. Elliot Danforth worked along with Sims and stated, “The bottom line is that you cannot gain weight on the Atkins diet. It’s just too hard. I challenge anyone to do an overfeeding study with just meat. You can’t do it. I think it’s a physical impossibility.”

On a more familiar level, one can imagine eating a large 20-ounce bag of movie popcorn (over 1100 calories) but not 1100 calories of cheese or even a cup and a half of melted Brie.

Both the anticipation of carbohydrates and the actual eating of them cause our bodies to secrete the hormone insulin which serves to deposit both fatty acids and glucose in fat tissue and it keeps those calories trapped in fat tissue once they get there. As long as we respond to carbohydrates by secreting more insulin, we continue to move nutrients from our bloodstream in expectation of the arrival of more, so we remain hungry or at least not fulfilled.

It’s not that fat fills us up; rather, carbohydrates prevent satiety. For the obese, these are profound implications. Whenever insulin is in circulation, fatty acids are not. Obesity results when fatty acids remain stored longer than they should. Fatty acids move constantly throughout our bodies in the bloodstream. They never sit idle as if they were in a trash can. This has been known since 1948. They move in the bloodstream, constantly changing directions, responding to the requests for fuel from the organs, muscles and tissues. However, when lipids get trapped in fat tissue, this causes fatty acids to stay in fat tissue for longer than normal and this results in a slowdown. This metabolic slowdown results in weight gain over time.

We notice the effect of hyperinsulinemia at restaurants after eating a large steak. We are particularly stuffed yet when the wait staff comes and offers a delectable treat, we seem to find room even though we know we’re stuffed. If the wait staff were to offer us more steak, we would likely refuse. The anticipation of the sweet causes insulin to be released, which lowers our blood sugar, and creates the very real need to balance the blood sugar with more sugar. This is the vicious cycle of hyperinsulinemia and this is present even in lean people.

The second observation is that obese people crave carbohydrates in two ways. In the first case, we have insulin secretion during a meal. In the second, we have the usual insulin responses in anticipation of and as a result of the meal. In both cases, insulin induces hunger or prevents satiety. In the case of hyperinsulinemia, this happens even between meals and/or during the night when the cells should be living off a fuel mixture predominantly of fatty acids. Instead, the high insulin traps the fatty acids in fat tissue and primes the cells to take up glucose in place of oxygen. As far as the body is concerned, this elevated insulin indicates that we’ve just eaten. However, in this case, we haven’t.

Our homeostatic system is expecting to deal with glucose but there is none coming in the diet. Despite this there is still too much insulin in the circulation. The liver will not give up its glycogen due to high insulin in circulation and our blood sugar drops causing us to crave glucose. Even if we eat fat and protein, the hyperinsulinemia will serve to store those nutrients rather than allow them to be used for fuel. The implication is critical to how we perceive the dietary treatment of obesity and one in which even the current low-carbohydrate diet plans do not address.

Sugar provides an exaggerated response to the region of the brain known as the reward center, the nucleus accumbens. Intense cravings for sugar may be explained by the intensity of the dopamine secretion in the brain when sugar is consumed. When the nucleas accubens is excessively activated by sweets or powerful drugs, it leads to abuse or addiction. When the system is underactive, it results in signs of depression. The fact that this is an addiction indicates that it can be overcome with sufficient time, effort, and motivation and this is not the case with hunger itself (except in the case of the anorexic).

Avoiding carbohydrates will lower insulin over time and so ameliorate the hyperinsulinemia that causes the carbohydrate craving itself. Dr. James Sidbury found that after a year to 18 months the appetite is normalized and the craving for sweets is lost. Carbohydrate restriction is very difficult but with sufficient time and motivation, a person can indeed overcome their addiction to the sweet and thus improve their health.

To overcome this addiction to carbohydrates will require support. There is free online support available in our Facebook Groups, Zeroing In On Health and Zero Carb Health where you can come and learn what it’s like to live the Zero Carb lifestyle.

What Is Zero Carb?

Manipulating Ketones and Glucose on the Zero Carb Carnivore Diet.

What Is Zero Carb?

More About Weight Gain on the Zero Carb...