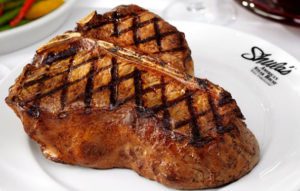 To begin with, the sample menus are not some ‘huge amount’ of food at all.

In every single sample day, there is at least one meal where no actual general size/amount is even specified…so, that leaves it open for people to allow their own level of hunger to guide them.

The amounts listed are suggestions, in any case. That’s the whole point. It is not some kind of ‘diet’ list to follow to the letter. That includes the amounts.

The purpose of the sample menus is to allow for people to learn to properly establish their own bodily hunger signals and allow them the freedom to do so. Meaning, to give them an indication of how much it is perfectly fine to eat, if their body wants/needs it.
Relearning proper hunger, meaning, learning to follow and understand it better as part of the process of attaining a better synchronicity between what their cells need and how they respond to fuel those needs, is very important for re-balancing hormonal pathways.
If you don’t go through this to re-balance the hormonal pathways involved, you will only keep the current imbalances pushed out of ideal alignment for even longer. Thus, this freedom to eat is very important. Especially in the early months when the body is relearning hunger/satiety on Zero Carb, it is vital that the mind only plays a secondary role, rather than be allowed to dictate volume and times eaten based on our previous notions of what ‘should’ be enough.

This takes time. And it takes allowing your body free reign to eat as much as it calls for, which is very necessary to breaking those old belief systems, patterns and fixations, based on our previous mentally-driven beliefs and misconceptions about what a ‘serve’ is, etc.

No one is saying you have to stuff yourself silly. We encourage people to follow actual hunger. But, for many people this FIRST means they have to let go of the old ideas, in order for their mind to even be open enough at all, to properly begin to HEAR what the real cellar hunger signals really are, on a Zero Carb Carnivore diet.

Most people are still subconsciously restricting when they start ZC.

This is the only reason we give guidelines at all. To help encourage them to let go of those limitations they are unwittingly creating for themselves.

When you can eat with true freedom, the body will more quickly be able to become in better tune with the mind. This will help to get the hormonal pathways balanced and in proper homeostasis faster. This will then allow the mind to have a better grasp on properly interpreting the signals it is receiving from the cells, from the hypothalamus, and from all the other signaling pathways involved in hunger/satiety etc.

Then you will be in a better position to actually recognize whether you are eating for sheer entertainment, or due to boredom, or whatever, or eating based on hunger and fuel needs…which we previously so messed up on SAD and other diets, that the mind has lost its ability to know what is what at all, much of the time.

So, it also depends what stage you are at. If you have been Zero Carb Carnivore for a good few months, you are probably getting better at ‘hearing’ the real cues. Meaning your mind is getting better at interpreting all the signals involved. And that means you’ll have a better idea if your eating behaviors are due to actual hunger, or if you are using food as some kind of other salve, like for dealing with emotions, or for dealing with boredom or anxiety or fear or the vagaries of life, etc.

In those cases, by all means there are things you can work on, regarding your emotional attachments etc…to help get you get better aligned and better able to achieve a state where you are only using food as fuel.

But most people need some good ‘freedom’ time first, before they start analyzing those things too much. Because they will end up under-eating if they don’t first learn to let go of that life-time of habits of restriction, confusion and fear-based mental ‘control’ over when and how much they allow themselves to eat.

The amount of food given as suggestions in those sample menus is perfectly fine, especially considering that they remain somewhat open in the amounts suggested when you look at them over the whole day, rather than just at each meal.

Some people may not eat as big a breakfast as others, but will eat a larger meal at dinner, for example. The menus allow for those differences in individual proclivities. Some people eat their biggest meal at night and feel best doing so. Others need a really big breakfast. Some don’t need or want lunch. It doesn’t matter. They are all guidelines, nothing more.

What matters is that you get a sense of the freedom to eat and learn to follow it. That is what will give you the surest and fastest route to getting to where you properly can identify what your body is telling you. And that will help your hormones attain their proper balance faster, too.

If you are not hungry, don’t eat. If you’re eating just because you don’t know what else to do with yourself, find something else to do for a while until you are actually hungry. But please understand that for most people, FORCING mental ideas about which is which, when they are still in their early months, will usually lead them to eat too little.

That is the only reason we caution against mentally ‘deciding’ what a proper amount ‘should’ look like. You won’t know what that is, until you’ve lived real ZC for a good while and until you’ve become better able then, to hear all the body’s various signals for fuel properly…as opposed to your mental ones, which will still tend to be louder in the early stages.

You don’t have to force yourself to eat a full 2 pounds of meat every single day, either. But it will take time to learn what is what, so that you can even learn to recognize whether you are just ‘off’ your food because you’re going through some temporary food apathy stage, due to making the change to ZC eating and/or the withdrawals from the old carb-stimulation of your appetite…or, if despite your mind thinking you’re not hungry, your cells are still in fact hungry, regardless of what your mind feels about it.

The best way to get through all of that, is to eat a little, or eat some more, whenever you even start thinking about food or questioning whether you are hungry, and to not worry too much about the ‘why’ for the first few months, at least. And let the process happen naturally, where your body will sort all that out for you, in time, as it gradually just unfolds effortlessly into a better, more intuitive understanding of all the signals and what they may mean.

Then you’ll know if you have any issues you might try to work on, like if you eat often because you’ve used food to soothe your feelings for your whole life, for example, or if instead it is because you are actually hungry or getting signals from the cells that you do indeed need fuel.
Trying to rush this process too, just as with other areas of ZC, ie. trying to force it all mentally, instead of allowing the learning and natural transitioning of the body to reveal this based on its own needs, along with revealing all other ‘habits’ and prior fixations to you, over time…causes issues, more often than not, for new people.

Usually ones involving trying to ‘fit’ their food intake into various ideas about what they ‘should be eating’ or how their hunger ‘should’ behave, which ends up leading them to eventually caving to all the pressure these place upon them, such that they end up ‘blowing it’ altogether, when they can’t take the strain of the self-imposed rigidity anymore.

Let all of that go. If you’re really not hungry, don’t eat. But be aware that, until you’ve been Zero Carb for at least a good few months, your signals will and can be easily misinterpreted by the mind. So an attitude of freedom to eat whenever you want, is an important step in breaking those old confusions which the mind still clings to and which it so often turns into even more confusion, when our focus is trying to mentally ‘figure out’ and place boundaries upon how much and when we eat on ZC.

For more information about the Zero Carb Carnivore Diet join us in our Facebook Groups Zero Carb Health (Closed Group), Zeroing in on Health (Open Group).